The force of friction is much lower than the holding (normal) force — the friction force would generally be approx. 20% of the holding force. But those are not the only forces of physics that affect magnets in production facilities and warehouses. Read more about how to make sure you use your magnetic chucks and lifting magnets safely.

You have probably experienced this: Taking two magnets apart takes some effort but sliding one to the side is pretty easy. Why is that? Various forces of physics are to blame — each force pushes the magnet in a different direction. When pulling two magnets apart vertically, the pulling force needs to be approximately 5× higher compared to sliding the same two magnets aside.

Which forces of physics affect the magnetic force of a magnetic chuck or a lifting magnet? In this article, we’ll talk mostly about the holding force, the force of friction and of course,  gravity.

The normal force reflects the actual load capacity of a lifting magnet. For a load to be lifted, the magnet has to surpass the force of gravity holding the load down on the ground. The relation between normal force and gravitation transcribes to safety coefficients set by legal standards (EN 13155:2020(E) standard).

All lifting magnets have to pass a so-called pull-off test (on a certified pull-off machine) before they’re released to the market. Such a test is archived and linked to the serial number of a particular magnet. Therefore, each high-quality lifting magnet should come with a load certificate with results of the pull-off test.

Lifting magnet certification is valid for a year so the pull-off test has to be repeated every 12 months. We always visit our customers to run revision tests on site with our mobile pull-off device.

Maximum load capacity of a lifting magnet is reached on condition the tilt of the lifted load is zero. The lifted object should be always centred perfectly towards the magnet.

The centre of gravity tilts every time the lifted load is not 100% centred. The force of gravity then splits in two parts:

while the vector sum of these two forces equals the force of gravity.

The more tilted the lifted object is, the more powerful the friction force gets. The normal force gets lower — and magnetic force as well. The highest allowed inclination is usually 6 °. This maximum tilt rule has to be abided to make sure magnetic lifting is safe.

Now, how to move around the lifted load — from horizontal to vertical position? With our NEO Lifting Magnets, we’ve solved this problem with additional equipment, such as our NEO HV Lifting Arm. It has a stop block which prevents the lifted load from sliding down. You can then use the magnetic capacity of a lifting magnet to the max. 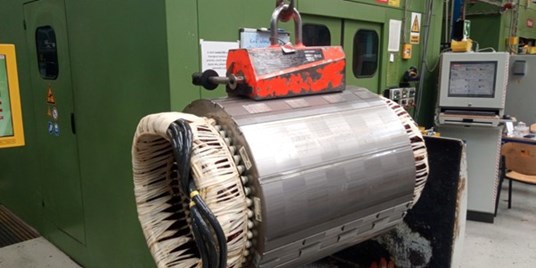 A stator packet being lifted by a magnet at Siemens facilities in Frenštát pod
Radhoštěm (Czechia). As it’s made of folded metal sheets of various structures,
we decided to perform a test-lift on site. Our NEO SPC Lifting Magnet worked perfectly.

With regard to chemical properties, the most suitable material for magnetic lifting is standard construction steel. Elements added to alloy steel (e.g., mangane or chrome) decrease its magneticity, all the way down to non-magnetic austenitic steel.

The more homogeneous the lifted object, the better. Alloy workpieces composed of several materials and of various structures are always more unpredictable when it comes to magnetic lifting. Such as the stator packet in the picture below:

The thickness of the lifted load is also important. Any dents, drilled slots or other surface irregularities can affect the maximum load capacity of a lifting magnet in a negative way.

Never underestimate the shape of the lifted load either (or, more precisely, the shape of the surface attached to the magnet). For instance, some lifting magnets cannot lift circle shaped loads.

To fulfil the potential of a lifting magnet, make sure you cover all magnetic poles when attaching the load to the magnet. Moreover, pay close attention to the diameter of the lifted load. Preferably, it should be larger than the magnetic poles. Thin workpieces always bear the risk of the magnetic field getting through and closing behind them — resulting in insufficient lifting force. Read more about handling thin workpieces in our article here >>

Last but not least, take into account possible air capsules as they almost always appear. Their causes are various — it could be non-magnetic materials on the lifted object (paintwork, foil) or just surface irregularities.

The science behind all the forces of physics that affect a magnet gets even more complex with magnetic chucks.

The force of gravity can affect a magnetic chuck positively (by vertical machining) or negatively (in horizontal machining).

Machining a workpiece clamped by a magnetic chuck leaves the magnet exposed to many combined cutting forces — they affect the magnet both vertically and horizontally. Cutting forces are determined by cutting conditions and the machining device’s geometry.

The rules for testing magnetic force of magnetic chucks are not set by law (contrary to lifting magnets). Each manufacturer sets their own internal rules. Any magnetic chuck from Walmag comes with a control certificate with the values measured during performed testing.

Moreover, we always test our magnetic chucks on a certified pull-off machine while developing our prototypes.

There are several methods how to test magnetic chucks:

How to Choose a Magnetic Chuck

The direction and angles of employed cutting forces: The optimal angle is always vertical to the magnetic pole.

Coverage of magnetic poles: Ideally, a workpiece should cover as many magnetic poles as possible. Make sure to cover the same number of north (N) and south (S) poles. In some cases, adjusting your machining processes might be necessary. Example: Our customer needed to cut steel rods of 2000 mm to 90 mm pieces which would then be machined. But the short 90 mm rods didn’t cling to the magnetic chuck tight enough. The possible solution would have been to set the machining device to lower power — that was a no-go for our customer. Instead, we agreed on a different approach: The steel rods get cut into 470 mm long pieces, those are machined (the magnetic force of the magnetic chuck is sufficient for the longer pieces) and only then cut to required 90 mm rods.

Roughness of the workpiece’s surface, air capsules and compactness of a workpiece: Magnetic chucks are affected by these factors in the same way as lifting magnets. Everything that’s been said about chemical properties and temperature is also valid for magnetic chucks.

The overall magnetic clamping force should always be twice the cutting force. You also need to consider that tall workpieces might fall over (especially if their base is small).

Don’t get scared by equations. All Walmag magnetic chucks come with a detailed user manual containing all the rules for safe clamping. And you can always get in touch with our customer support.